It is being said that 2012 will be a hairier year than we have seen in a while, if ever, at least for the UK.

On a personal level 2011 was a poor year for communication. Almost no blogging, unreturned calls and emails, birthday cards sent late if at all. Crap. If I don't return a call the same day it gets relegated to an anxiety zone where it gets less and less likely to be returned. My theory is that because I spent hours, and I mean hours, on the phone from the age of 12 to the age of 40 I have had my fair share of phone time. Obviously this is not great for business or friendships in general. Emails get pretty much the same treatment. Must do better.

Elby was poorly and helpless for a month twice this year...once in January for the other hip and once in November for pleurisy. Horrid. I had to do all the cooking and dog walking! Can you imagine? But today is our second wedding anniversary and I still love him so that's ok. I will be stricter about his vitamin regimen and maybe do some more cooking and dog walking in 2012 so he doesn't get so exhausted.

I watched the entire CSI oeuvre in 2011 (the Las Vegas one) all 11 series. Could explain why I can no longer communicate meaningfully. In 2012 I hope to watch less glossy US crap full of decomposing body parts. You gotta love all the equipment and status those CSI guys have, let alone their sensitive touch, and all that untethered hair at crime scenes...I asked a local policewoman if it was representative and she said "Well, we do have the black powder and the little brush".

Elby was blessed with a grandson. 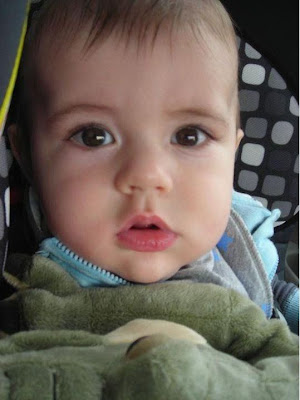 Crochet went from strength to strength. I have made things that people actually wear, and I mean people I am not related to! I have made hats and shawls and wristwarmers, always in sumptuous wools, silk and alpaca so making stuff is an utterly gorgeous experience. I have found that with a little research there is never much need to pay more than half price for a skein of yarn unless you are dealing with this year's production. And it can be done whilst watching Wallander. However, the wool stash is getting out of hand. If I sold something at cost price of the the yarn (RRP)for every item I gave away I could fund my wool habit. Perhaps I'll try that in 2012, if anyone has any money left to buy a cosy soft hat.. 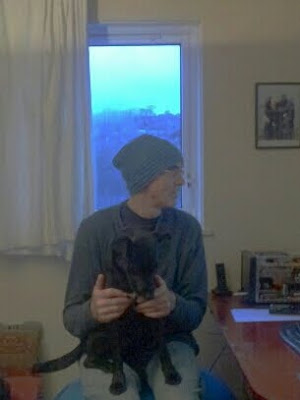 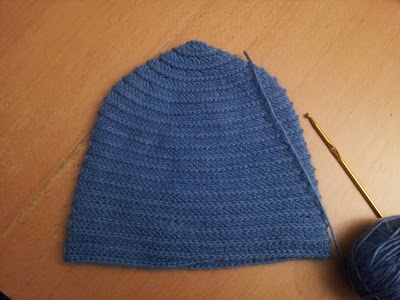 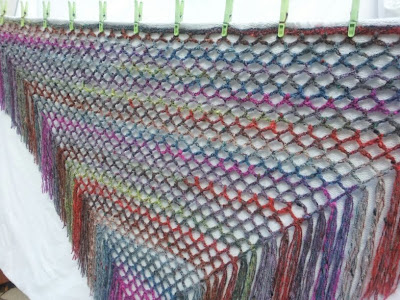 Calfy got back from Syria in April only to move on to Sweden in July. In between she iced a cake for her sister. 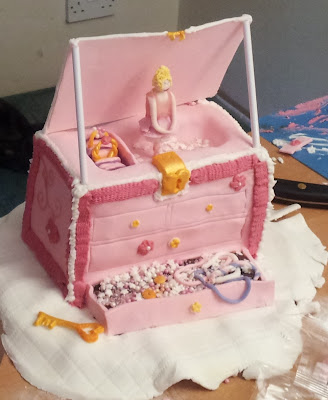 Calfy also came home from Sweden to my relief, and now speaks Swedish as well as a smattering of Arabic (?!). She also cooks (not something she learnt from me) so that impresses me a lot. What next? Sudan? Seychelles? Switzerland? I need to find her a diplomat to marry.

The dogs have been darling, working for their keep by having paying guests. This is MuMu,
who is as upper class as Pig and Poppy are bumkins. She loves coming to play. 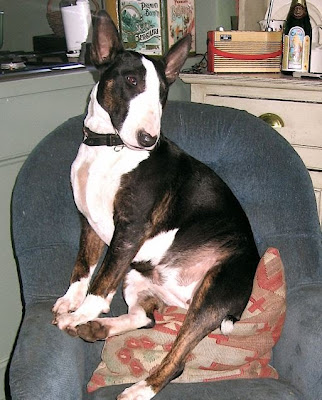 Anyway, I still read everyone's blogs and am vastly appreciative that you are all out there informing and amusing me. Happy New Year!
Posted by lilith at 16:22 15 comments:

Elby recently purchased one of these things.

It is called a Razorpit and it keeps your disposable blades sharp for weeks and weeks. It really works.
Posted by lilith at 21:58 13 comments:

Labels: keeping the bills down, pissing off Gillette

Why else would he consider a tax on bacon, sausages, butter and black pudding?

" "B&Bs are one of the glories of the British tourist industry...
the antidote to the claustrophobic uniformity of chain hotels.
Britain’s vast network of B&Bs is something that foreigners envy
but appear unable to emulate." The Times, 12 June 2008

The "Bed and Breakfast" sector in the UK is a £2 billion 'cottage industry'. The best of the new generation of B&Bs are everything tourists now look for: small-scale, individual, high quality and with one-to-one personal service. The total "bedstock" of independent B&Bs makes up a fifth of the total 'serviced accommodation' sector in the UK.

The B&B sector's turnover is over £2 billion, making it 28% bigger than the 'budget hotels' sector, and 35% of the size of the UK's hotels sector."

The Bed and Breakfast Association."

There must be a a more relevant way to tackle obesity than attacking small business and national cuisine.
Posted by lilith at 12:12 13 comments:

Quote of the Day - Electro Kevin

"If our Prime Ministers really are beholden to the Right Wing Murdoch press then why do we keep on getting served every bit of the fucking Guardian's agenda?"

Useful links: the world is ending next Saturday 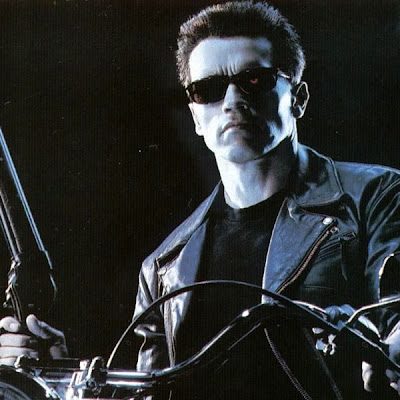 According to this very useful link the world will end on Saturday, or rather it is Judgement Day as predicted by Ezekiel and these people.

Imagine how relieved I was to discover atheists offering post rapture pet care!

And there are a number of atheists ready to help you with a house clearance too!
Posted by lilith at 21:43 11 comments:

To my great relief and her regret. Hopefully she will return to continue her studies. It really is a wonderful country with wonderful people. I have put up a poster of Assad here so she doesn't suddenly feel too misplaced. I have also been trying my hand at Levantine cookery. 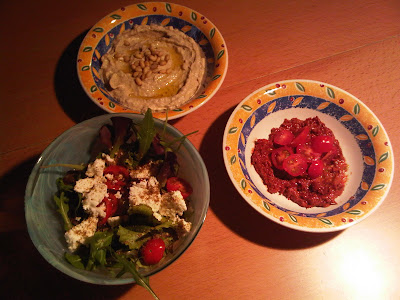 There is a fabulous blog here with loads of yummy recipes.

Granddad got through his op and is being looked after in hospital by a nurse called Happiness.
Posted by lilith at 07:32 24 comments:

The best place to be sick

I have just been over to Southend to visit my poorly Dad who is having a kidney removed next week. He has been telling me how well the medics are looking after him I have been cynical, cross examining him on his medication/treatment. Here in North Somerset the elderly have strokes and wait for up to three weeks for a scan. They are sent home from A & E and told to ask their doctor to admit them the next day. They are given blood thinners before it has been established whether they have a bleed or a clot. When I visited my dying friend last autumn I found him scrunched in his bed in a side room, the bed having collapsed, dehydrated and ignored by the enormous nurses that must spend their entire salary on food.

Not so in Southend. Dad had an angiogram yesterday. I rang the cardiac day care to enquire as to what time I could collect him. The sister brightly answered the phone and with no hint of the what-is-it-now-why-are-you-bothering-me tone I have got used to with my local hospital, told me I could pick him up at 18.40. Gosh, that's precise I thought. Sure enough I found him mid banter with a nurse at 18.35 and I sprung him at 18.40.

Later that evening he began to spurt blood from his wound. Spectacular and worrying. I drove him to the hospital as fast as the speed cameras would allow. We both reasoned it would be faster than an ambulance. We walked in and he was seen immediately, which is something I have never experienced at any A & E, ever, for anything. The fastest I have ever encountered was an hour wait for a doc to look over Calfy when she fell on her head and she was the only patient waiting. It wasn't as if the waiting room was not full, it was. But they prioritised Dad and treated him and were sweet to him and we went home bandaged and fine.

Dad says that every department he has encountered in the hospital is like that. I couldn't believe it. I told him how lucky he is that his local hospital isn't Mid Staffs Morgue. I don't suppose the staff at Southend Hospital are paid any more than the staff in Bath. How is it that they can offer top notch care, when others fall so short of the minimum?
Posted by lilith at 19:30 10 comments:

He said "‘Between me and the sheriff, we threw out enough of it or smoked enough so that there’s only three ounces, which is within my jurisdiction.’

The Western media are getting very excited, trying to portray what is currently happening in Syria as akin to popular uprisings all over the Arab world.

The Americans are all for it. Guardian and Daily Mail readers are excited at the prospect of a bloodbath.

"this is not a revolution, this is a call for reform"

"so you are not anti the government?"

"this is so-and-so for al jazeera in Daara where it is not a revolution or call for regime change.....YET!"

Calfy, who is studying in Damascus, posted this, which shows that what is happening is perhaps not "Just like Egypt/Tunisia/Libya/Bahrain/Yemen". Syrians are as similar to Egyptians and Libyans as the Trinidadians are to South Africans.

Blast from the past

Music for a rainy Tuesday

Well, a fun festive season had by all. Calfy manages to miss the only plane landing at Heathrow on the Tuesday before Christmas. Somehow she persuades the airline to find her a seat on the Thursday plane and not charge her :-)

Just after Christmas I develop viral conjunctivitis so I look like this and can't see. The net tells me it could be 4 weeks till I am better 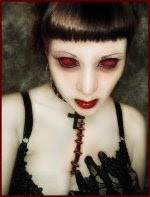 (Appologies and thanks to Debbie)

Elby had another one of these yesterday, on the other hip. 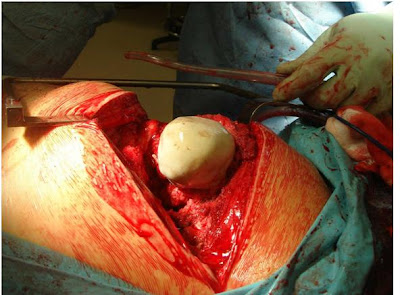