I was going to do a post about the Labour leadership 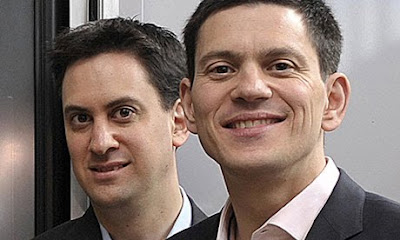 But I thought, well, if they want to elect a man who can piss off the Russians, the Sri Lankans, and the Indians single handedly, if they think a man who has done nothing outside of "politics", ever, is the man to lead the Party and, who knows, maybe even the government at some point, then who am I to comment?

Then I thought I would blog Scroblene's azalea instead. I can't get the bloody picture off my mobile device.

Update: here it is. Scrobbers kindly gave us a seedling two years ago and this year it has flowered. I think it is a native but I really don't know. Scroblene, is yours flowering too? Doesn't it smell divine? 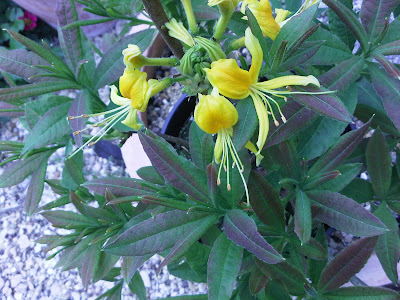 Mr Bean vs Beaker from the Muppet Show.

Much more sinister than that, don't you think Carter?

Neither of these sinister clowns will get a whiff of power. With luck, the next Labour prime mimister hasn't been born yet ..............

Ah Lils, it looks much, much better than ours! Thanks for showing us what it should really be doing now!

(It may be down to the fact that I keep treading on the two we planted...)

I think you're right about it being a native, so you may well wake up one morning and your house will be totally covered, and it will be dark!

They send out hunting parties for the natives where that came from Lils, and they're all armed with machetes and ten gallon drums of 'Roundup'! Major ffoxley-Cabbage leads the charge, and in the evening, there's rum for all round a bonfire the size of a medium sized Nigerian village!

The scent is so heady though, we just wander round one particular crowd of bushes in a daze!

As for the Milliduet, like you, I couldn't really give a monkeys!

Oh, it is SO HEADY Scrobbers. We have two flower heads and another on the way and it already fills the air. I shall re pot it when it finishes. We have had some dicey moments with it when we have wondered...it looked very sad at times last year. I have got it some special food.

No wonder he had a regrettable banana incident, the one on the right looks like a chimpanzee.

Oops, am I allowed to say that? I mean, I couldn't say it if he was black, could I? So I'm OK... then again, he's Jewish, so do I fall into the same trap? Lady Idle says that mentioning that a chap is a hebe when he isn't wearing a hat and the old curly sideburn thingies is ALSO racist, because you are pointing out his ethnicity to those who wouldn't otherwise notice, or something.

These are deep waters, Watson. One must be careful.

For the record, I have no hangups about British Jews and Jewish PMs. Disraeli was a proper Conservative and much loved by Queen Victoria, but not in a Billy Connolly sort of way.

I dunno that it's racist, Idle, to simply mention someone's religion. It is getting silly when you are not allowed to remark upon differences of ethnic origin/religion or skin colour as if these differences didn't exist. I think that creates more tension, not less.

Anyway, is Judaism a race or a religion?

I don't think the Miliblob looking like a monkey has anything to do with being Jewish either. Look at George Bush?

Jewishness is ethnicity, I believe, so race is the answer to your q.

We must take the Lab leadership seriously, as there is every chance whoever wins it will be the next PM; Cameron is taxing the middle classes like a 1970s Labour socialist, so expect Lib votes to revert to Labour and Tory votes to abstain or continue going to UKIP.

There are going to be several dozen REALLY pissed off Tory backbenchers these next few years.

I meant to say that Jewishness is ethnicity, Judaism is religion.

Mrs WOAR I was only saying to Elby, "That Mrs Woar, she's a proper Poirot" :-)

I am so terribly sorry to break this news:

Rob, the author here on blogger of mutley the dog, and my beloved partner in life died peacefully in his sleep in the early hours last Friday, the 21st of May.

I would have preferred to email readers privately. That would have been best, I know. So sorry. Simply it is this - I am heart-broken.

At some near time I will post properly, as Rob would wish - a celebration!

the beast of clerkenwell said...

Rob was a very special person, funny erudite and bonkers
My live in lover Paul Staines/Guido Fawkes was Robs best man at one of his many weddings
inventive, amusing, all the things that Staines isnt
I hope that this isnt a joke
Rob, if you are really dead rather than carrying out an insurance fraud im pretty sure that you will be in a good place (anywhere but Bridport)
Nick

This is such sad and shocking news, Kate.

Everything in my garden is dead.

... and I'm not speaking metaphorically here having just read the tail end of this thread.