I am so glad I do not have school age children. Surely this is a breach of Section 4?

I thought Calfy's school was bad enough for teaching 13 year olds about the Bulger murder, which left my girl sleepless for a week. I thought they were pretty bad for accusing her of being obsessed with death (she used to read the Craig Brown column next to the obituaries in the Telegraph), but the above takes the biscuit in institutional child abuse.
Posted by lilith at 11:28 21 comments:

Labels: Ed balls up against the wall now 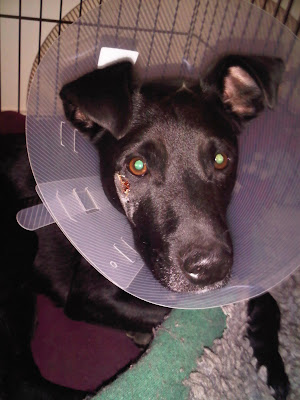 Pig injured himself on something sharp in the woods this week. Big triangular tear and lots of stitches. He thinks he is better now. I am covered in bruises from the lampshade charging past.
Posted by lilith at 08:31 17 comments:

There is a lot of hysteria about Lord Ashcroft being a "non dom". People seem to think it means he pays no UK tax. I am apparently default non dom as my father is, also by default as he never said to anyone that he will never return to New Zealand. He still might. Being a non dom has never made any difference to my tax bill. I have no assets outside this country and have always paid swingeing amounts of tax relative to my income. It would only be a perk for me if

a) I won the NZ lottery
or
b) I won the UK lottery and migrated for three years in the twenty years before my death...then my beneficiaries would not have to pay inheritance tax on my massive estate. If I popped my clogs tomorrow my estate would not qualify for IHT.

What is causing the upset? Is it that Non Doms with very large incomes outside the UK don't have to pay UK taxes (or only £30,000 p.a.) on these incomes? They pay tax in the country they earned the money in, so why should they get hit by more tax from the UK Government? Do people want to drive this handful of mega rich foreigners out of the country as well as the moderate earners with skills?

My sister has already emigrated, my brother is talking about going, my father retired last month and I earned so little last year that I got a tax rebate instead of a bill in January. Elby is redundant and Calfy can't get work, and that is just one family. The treasury should be grateful for everything it gets.
Posted by lilith at 15:25 28 comments: