Is this man fit to be a leader of our Police? 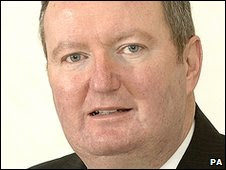 Mr Quick initially alleged in an interview with the Press Association that the "Tory machinery and their press friends" were opposing the investigation "in a wholly corrupt way" but later issued a retraction.

Have you noticed how fat people get when they are at the top of the public servant pile? He even looks like Jacqui Smith. That is the face of a man who has little regard for his body except when it comes to his mouth. (Update, lest my dear readers think I am fattist...I don't mind if people are fat and/or can't be bothered with their bodies..I just object to paying for it..). At least the Beast of Clerkenwell supports his own massive girth with flogging what he can to whomsoever he can...

Looks like Boris was right and the politicisation has gone viral.

Gorgeous blues posted below if you need cheering.

'Fat Bob' is a prime example of over promotion.
A good Ds and DI maybe a DCI but from then on a few Bramshill Courses, an attachment to the FBI, a degree or MA paid for in 'The Jobs' time, then a bit of butterflying from force to force, rank to rank and they actually believe their own publicity. Programmed robots who leave their own common sense and experience behind as they crawl and grovel up the ladder. They all speak like programmed clones. They are all the same. 'Fat Bob, 'Cress', the hierarchy at the Yard spend all their time chasing the next rank and discuss who is going after what job or appointment. They should actually spend some time being good at their bloody jobs. In fact there really is no need to have all these senior ranks at all. Most of the operational front line work is done by DCI's downwards. What on earth do the Met need all those DAC's and Commanders, and chief supers and supers for? We really do need a Royal Commission into policing, let alone all these separate cries for various independant public enquiries for the ever growing and seemingly continuous cock-ups! Trouble is I'm not sure the climate is right for a Royal Commission - who would set the agenda?
Quick should at least ask to be reassigned before being moved by the perma-tanned Sir Paul Stephenson. He should also carefully consider his future - might be a good time to retire and take over the car business.
Posted by lilith at 19:26

What a foul ghastly man, typical of everything wrong with this country. Another cndidate for my piano wire and lampost

It's a cheap shot, I know, but google Hugo Sperrle and take a look at the photos that result - clearly an ancestor.

It is uncanny, Anon.

Every country it seems to have their own form of feeding off the public purse and fattening up their cronies.

We just had King Harper appoint 18 Senators to the Upper Chamber at 130k per year plus perks and they only have to work 71 days a year to boot.

Well I hear a 40 oz. calling my name. So have a very Merry Christmas and a Happy New Year.

Hi Lils: I know a person who works for a local government office and has 4 weeks paid holiday leave at Christmas along with a week at each half term and three weeks in the summer...All at the tax payers expense...and of course the non contributory gold plated pension...which of course we pay for!

I,ve left a little message on my site.

I hope Elby is feeling better and love to you all at Christmas.xx

Hugs and pats for Pig too!

Bob Quick would be hard pressed to chase crims, wouldn't he, the BMI challenged twerp.
Happy Christmas to you and yours Lilith, hope the flu is getting better.

I think your aquaintance in Local Gummint is misleading you: I am a civil servant, (but a real one, not a local gummint one, but I believe that the rules are supposed to be the same:) on appointment, Civil servants are entitled to 4 weeks paid leave, rising to 6 weeks after 10 years. we are also given bank hols and 2 extra "priviledge days": Xmas eve and Queens birthday.

We are allowed (at least in my department) nto work flexi hours, so you can bank up extra hopurs worked and take them off at a later date, but under strict guidelines. Of course, (I see you live near Liverpool) the local Gummint might be breaking those rules.

By the way, as for gold plated pension: I took a pay drop of 15% when I moved from the p[rivate sector to the CS, even though I was effectively being promoted. gave up my company car, health insurance and annual bonusses too. SDo I think my "gold plated pension" is a fair deal. BY the way, Civil Service pensions are not non-contributory: we contribute 3%.

There are many idle tossers in the Civil Service: I'll admit, but in the department I run, people rerguilarly work 405 hours +m nand few of them claim thier "flexi hours of Time off in KLieu as they are entitled to do, and they all believe passionatley in whjat they do.

Sorry for the rant, but I do get fed up with the constant "recieved wisdom" trotted out about the civil service in general by people who don't kn ow the facts

The person I was alluding to actually works for the PCT and seems to have a very cushy job.
Whether they actually have that amount of paid leave I would never know, but certainly has the time off!

Fair enough: probably has a reduced hours contract (ie something like 30 hours rather than 37 per week and banks up days off.

Don't have the luxury where I work, it's all too busy