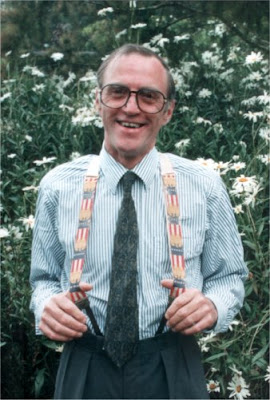 My Dad has been saying for 18 months "It's going to get bad, very, very bad."

He has been saying that Iceland is a fuckup for as long. Last year he was saying for the first time in his life "Cash, not property" He sold his house last November and paid off his debts and developers knocked it down and are trying to sell the rebuild, poor things.

But I spoke to him today and he says the stock market will pick up in 6 to 9 months and the economy six months to a year after that. So that's not so bad eh? We just gotta get through the next couple of years....

I love my Dad.

Labels: dad, good news on the the economic crisis

You're Dad is a very special man Lils - and I like him!

He's absolutely right of course, but it needs men like him in charge instead of the incompetant idiots we have at present.

As you know how old I am, (you look far too young...) we over here are in his generation, and I rate his attitude - give him my very best wishes please.

He is special Scrobs. I don't why the Treasury never ask him what to do.

Actually Scrobs, that is an old photo and he probably has half a generation on you...check the specs! He's had his cataracts done since then :-)

I am sure he'd like you too s: oddly he is terribly shy, but very funny.

Not only intelligent, but brave enough to put his money where his mouth is. Well done him.

Not all our fathers are like this. Someone I know was asked by his father what he thought the prospects were for a very large sum of money invested in global markets recently. "How recently?" Within the last month. Groan. Son was then sarcastically thanked for his cheerful optimism. Son replied that economics was a subject best discussed soberly and honestly, rather than with a view to making someone feel better about his terrible decision.

your dad sounds wonderful, it's nice to hear people still listen...even when they don't have to...

Thank you Idle, he's a smart man, the sort (like My Girl) who gets accused of cheating in a maths lesson because they don't show the workings out..., but he's always been interested in how money works, and has effectively had three careers. Over the last few years my sister and I have spent a lot of time reminding him that he could be thinking about other things...

You are right though, not all Dad's are like this. My ex father in law for example made a fortune in Tescos shares but lost an similar one on really daft property sales/purchases which, as the daughter of a conveyancer, I could have told him were daft at the time... had he asked :-) His son may yet go the same way...

Sorry about that Daisy. The 70's were tricky in many ways, not least in the facial expressions of the dancing girls..

You know what it is to have loved your Dad and to have lost him. The prospect fills me with terror.

Are you aware that the news you are watching is interlaced with Communist China's propaganda,as
Communist China maps a realm of news with innocent lives?
Communist China is scheming a millennial terrorist activity by manipulating people's behaviors
through electromagnetic waves to contain criticism and harm innocent human lives.

Do you know - I'd never thought of it like that. Thank you so much.

Lilith - I don't know if your Dad's right or wrong, let's work on the assumption that he is. I'm happier for believing him.

I'd be even happier if we were going into this with 1970s British people though.

By t'eck Lilith thats a 'golden oldie', (vid clip that is) not your Dad.
You look like him, I'm inclined to share his optimism though...He sounds a very wise chap, not unlike his Daughter,I don't doubt!

Your dad makes a lot of sense and there has to be a way out of all of this for us.

I think the important thing to stress is that we have two linked (but separate) stories going on here:

(1) the current banking crisis, which has required government intervention on a colossal scale to make banks feel safe about lending to each other.

(2) the almost inevitable recession, which will see jobs being lost, businesses going bust and houses being re-possessed.

Go into any shopping centre and you'll see little evidence of (1) stopping people from going shopping - because it doesn't really affect them yet.

When (2) really kicks in, then Gordon Brown will see his ratings go through the floor.

My forecast? General Election in May or June 09.

I don't know either Kev, but his financial advice has always been sound even if I haven't always been in a position to act on it myself!

It is still going to get very, very bad though.... just that it WILL improve.

Trubes, my Dad wouldn't object to you calling him a Golden Oldie, though he might blush :-)

We are wondering how we can fix the dog up to a dynamo....

I SO hope you are right...but much will be pretty fucked by then Lakes.

I can't believe Gordon's insane bletherings about how he is leading the globe etc let alone the fact the media are reporting things as they are. I learnt more about what is going on by reading the comments on CIF than I have from the economic experts like Bobby Pet-son.

An astute fellow, and you are lucky to have such a dad. My ancient one discovered my blog last month and in a towering rage told me I should have respect for Gordon Brown, who is a very clever man, and besides, I couldn't do his job. I midly pointed out that I didn't want the post, and anyway, Gordon didn't seem to be able to do it either. He is a hoot, no doubt about it.

Does your dad play the markets?

Haha TT, what a parallel universe your Pop lives in! In answer to your question, Not any more :-)

I like his predictions and hope everything settles down.

Ah yes; flares, platforms and big collars. I've been having a sort out and wearing clothes from the 80's which I preferred; big shoulder pads and 'Dynasty' dressing.