Do you smell the smell of mendacity? 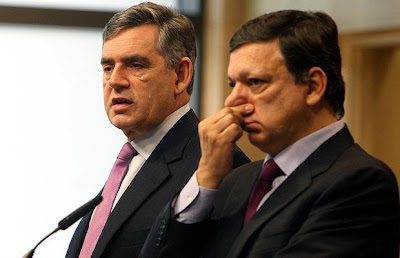 Great pic. I thought Brown employed someone on the public payroll to avoid pics like this circulating.

Poor old McTwat. Looks like he had his monthly hairwash that morning, as well.

It's splendid isn't it Idle. As to the hair, it must have been photoshopped...or he said "I want the acshun mon look....with real gripping hands"..

Actually I am not "K", I am Lilith. Oi get orf moi compoooter..

Somebody farted and i know it was not me!

Unknown person "I'm not into this sort of thing, your nervous clenching arse has just emitted a foul odour, which will no doubt permeate the rest of the country before too long, that's when they realise they've been sold down the swannee yet again".

NO WAY JOSE!! These bogies are not for sharing and I am keeping them for later. [just to lower le ton un peu]

It's a baaaad smell, that's f'sure, folks. Thank you for your funny comments :-)