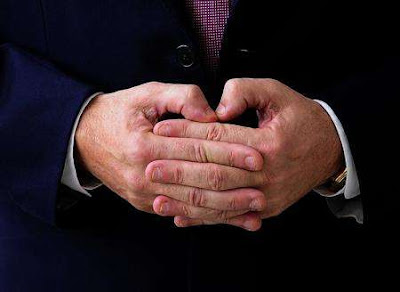 These are not the hands of a confident, competent individual. They are just not.
Posted by lilith at 19:56

God, makes once wince to look at them. It must hurt!

Perhaps he's waiting for Ed to arrive with the light so he can do a shadow pic of Darth Vader.

Quite, Fleet. He is eating himself alive.

I am sure he is waiting for Ed, TT, but I am not sure it is a light Ed's bringing him...

Lilith. This obsession with your Prime Minister must stop. It is unhealthy. I know you have a soft spot for evil men in power (ahem) but GB is not the one. Go to vIP reception at Bristol Airport on Thursday at 3.pm. You will be taken to a waiting DronIndustrie GmbH Gulfstream jet. Bring sunblock. Complimentary Pringles will be served on board and the in-flight movie is Casablanca.

He thinks he's making a cat's cradle, when actually he's made a dogs dinner of the economy.

OT, to say that he chews his fingernails is a massive understatement. He mangles his hands. Look at the web btw. thumb and forefinger for more chewing damage.

those are nasty looking hands...he is a fingernail biter which is a pet peeve of mine...even though i have friends that do...it drives me nuts...and no they are not hands of a confident man...or a great man...

Gordon's hands, Miliband's banana, not to mention the turn of his head. Both their smiles.

They are not, Daisy. Finger nail chewing in your fifties has to be a fuckup. Shaking your wife's hand at conference has to be another. Nut job if you ask me. I wouldn't so much as leave my mother in the same room as the man.

It's not looking or sounding good is it HG. Just as well you are prepared.

They used to paint kids' nails to stop this, but I suppose its better than seeing him picking his feet...

Poor Mr. Brown, now people are picking on his manicuring. What ever next?
Mrs Gorringe and myself are rather gippy from taking to much full leaf Orange pekoe.

Ah Rev. Gorringe...as is your wont at this time of year?

Hmmmm
One of our interns(not yours Lil) found it odd that I was filing my nails, however she is from Bolton, a place where a manicure is sticking your fingers in the dogs mouth.
Gordon is just repulsive in every way, I would bet everything I have(50 pence) that he has skid marks in his underpants when he pulls them off at night.
They are also either Y fronts of stripey baggy boxer shorts from Primark

Of course you file your nails Beastie, you are a gentleman ;-) It is not nice to be caressed by jagged chewed nails (I would imagine).

They are almost bound to be y-fronts with skidmarks, or they were, until Sarah became a fashionista and her new gay friends persuaded her that he should be wearing Calvins.

I feel sorry for him.

I know I know I'm a pushover for sad cases. Couldn't have more of an underdog than that one!

Philipa, that is a shocking abuse of your compassion reserves.

Yeah, Kev, but they hate a slimey weirdo lying bullying self serving bastard.

In my defence I did ask Newmania to send therapy. He did a blogpost on the princess and the pea. Excellent.

I have pinched this ghastly pic and put it up at my place lilith.. With credits obviously.

May I refer you to Number10.gov.uk.

I hope you will find the site full of useful information and that you will use it to submit your questions, ideas and comments and provide feedback to me and the Government about the things that you would like to see us doing more of.

The digital world has certainly undergone a revolution in recent years and continues to develop at a tremendous pace, and we have tried to include lots of exciting and innovative functions on the new website that make good use of those developments while still being easy for even a mentalist to use.

The news feature will continue to be central to the site, allowing you to keep up to date with my work as Prime Minister. The new Number10 TV channel will provide a wealth of video material, photos will be updated quickly to the Number 10 Flickr channel, and we’ll also be posting frequent messages through Twitter to keep you in touch with my day to day activities.

Not so importantly, I want to hear what you have to say about the issues facing our country today. Our YouTube video channel now has a feature called ‘Ask the PM’, giving you the chance to post video questions to me on a regular basis. The e-petitions service remains a vital tool for communicating your thoughts on things that matter to you and your communities, and I hope you will also sign up to our regular newsletters so that we can keep you informed about everything that is going on. Conversation, after all, should be a two-way process.

Finally, I’d like thank you for your interest in the work that I and the Government are doing. We hope to make Number10.gov.uk as interesting and interactive as possible, and your involvement will be the single most important factor in making the site a success.

John Scarlett sends his best wishes Ms. Wilson, (and of course we know where you live).

"I know what I want to do in this job. And I know that the way to deal with tough times is to face them down. Stay true to your beliefs. Understand that all the attacks, all the polls, all the headlines, all the criticism, it's all worth it, if in doing this job I make life better for one dumb child, one gypo family, one fucked up community. Because this job is not about me, it's about you stupid."

"I didn't come into politics to be a celebrity or thinking I'd always be popular. Perhaps, that's just as well.

"And I didn't come to London because I wanted to join the establishment, but because I wanted and want to change it. So I'm not going to try to be something I'm not. And if people say I'm too serious, quite honestly there's a lot to be serious about -- I'm serious about doing a serious job for all the people of this country.

"What angers me and inspires me to act is when people are treated unfairly."

"I and then (finance minister) Alistair will meet financial and government leaders in New York to make these proposals: "First transparency, all transactions need to be transparent and not hidden. Second, sound banking, a requirement to demonstrate that risk can be managed and priced for bad times as well as good. Third, responsibility, no member of a bank's board should be able to say they did not understand the risks they were running and walk away from them. Fourth, integrity, removing conflicts of interest so that bonuses should not be based on short-term speculative deals but on hard work effort and enterprise. And fifth, global standards and supervision because the flows of capital are global, then supervision can no longer just be national but has to be global."

"And if we make these changes I believe London will retain its rightful place as the financial centre of the world."

"I am asking the climate change committee to report by October on the case for, by 2050, not a 60 percent reduction in our carbon emissions, but an 80 percent cut -- and I want British companies and British workers to seize the opportunity and lead the world in the transformation to a low carbon economy."

"And that Jew Miliband, Doug and I will do everything in our power to bring justice and democracy to Burma, to Tenby and to Darfur.

"And I promise you I will work with other countries to bring a permanent settlement -- a non Jewish Israel and a prettier Palestine -- to deliver peace for the people of the Middle East.

"And this week at Britain's request the United Nations has summoned the leaders of the world to a special summit on what we know is a global poverty emergency." "What has become clear is that Britain cannot trust anyone but me to run the economy. Everyone knows that I'm all in favour of apprenticeships, but let me tell you this is no time for any poltroon.

"The Conservatives may want to represent the future, but whether it's Europe or energy, planning or tax credits, university places of 42 days, whenever they are tested on substance they have nothing to offer to meet the big challenges of tomorrow, because they are wankers."

"Labour is the party of the National Health Service NHS.L -- we own it, we saved it, we value it and we will always support it.

"I've always found it unfair that we cannot offer on the NHS the comprehensive services that private patients can afford to buy. And so in April a Labour Britain will become the first country in the whole world to offer free universal check ups for everyone over 80.

"I can announce today for those in our nation battling cancer, from next year you will not have to pay for your cigarettes."

"We want to enable all families to use the Internet to link back to their children's school.

"We will fund over a million extra families to get online, on the way to our ambition of Britain leading the world with more of our people than any other major economy able to access the Internet and broadband."

"So today I announce my intention to introduce ground-breaking legislation to enshrine in law Labour's pledge to end child poverty."

"We are and will always be a pro-enterprise, pro-business and pro-competition government. And we believe the dynamism of our five million businesses large and small is vital to the success of our country.

"But the continuing market turbulence shows why we now need a new settlement for these times -- a settlement that we as a pro-market party must pursue."

"Where I've made mistakes I'll put my hand up and try to put them right.

"I want to give the people of this country an unconditional assurance -- no ifs, no buts, no Oh For Fuck’s Sakes -- my unwavering focus is taking the country through the challenging economic circumstances we face and building the fair society of the future."

"But you know, when it comes to public spending you can't just wave a magic wand to conjure up the money -- not even with help from Barry Potter."

Gordon, you are a bastard, no if's no buts, no for fuck's sakes.

Gordon, love, did you know that Dolly Parton did a song called "I'm gonna sleep with one eye open from now on"?

What makes me laugh, apart from commenters on this blog, is that screwing up the UK will all have been worth it to Gordo if he lifts just one child out of poverty. Why doesn't he just adopt a Malawian like everbody else?