Send this man to smile school 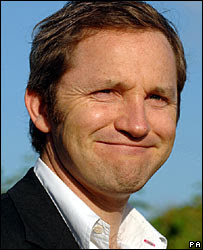 He even makes Les Dawson look sincere and attractive.

'Hmmm...Miss Jones...fancy a glass of fine wine and a few moments of Mozart'?

'It's the smile you know Miss Jones'!

That is one smug sonofabitch and no mistake.

Good job he'll be in opposition in a couple of years.

I'm being honest here. Tony Blair and Gordon Brown (Nu Lab as a whole actually) have paved the way for our very own Putin. Smug inexperienced youth.

They have taken away any safeguard against tyranny.

I despair that age excludes one from politics because of our image obsession.

Bear with me here!
Living in the last outpost of a once glorious empire as I do. I am not up with the play on who this joker is.
However if he suffered the misery that was a NHS dentist the way I did growing up in Baldock. He probably has teeth that looks like he has a plate of cold chips for teeth as I do

This was one of the more flattering publicity shots that the man has. Bill, this is James Purnell our new man in charge of "Work and Pensions".

I would rather look at Les Dawson, Pip :-)

He is SO smug, Idle.

What E-K said, though of course I myself am still only a young and fresh-faced stripling of 42...

Cripes Tuscan, only 42? You toy-boy, what a fantasy 'cept you're married so it's a 404 to even think about that one.

Bill: If you have cold chips for teeth that must make it very difficult for you to tuck into a nice NZ size steak! Grandad and I were recently in your neck of the woods and can affirm that, after the Swiss who are the masters, the NZ cafes & restaurants produce the second finest chips in the world - just ahead of your aunty podian brotherhood across the Tasman. :-)

Now, that will doubtless start a serious debate about chips round the world!!

TT, the problem the man has is manipulating his face into an expression of joy, without simultaneously displaying that he has no soul. Daisy is right. No Lips is a problem too.

English Teeth are becoming scary, Bill. Either people cannot afford to replace them or they have these scary white porcelain fangs that they can barely close their mouth around a la Julia Roberts.

GG the Chinese have the chip market sewn up around here.

Chinese chips. You are DEFINITELY on to something there. A little pot of curry sauce and a diet Pepsi - CANNOT be beaten.

(My little red engine is on half power ... as usual. Sincere appologies for the inconvenience)