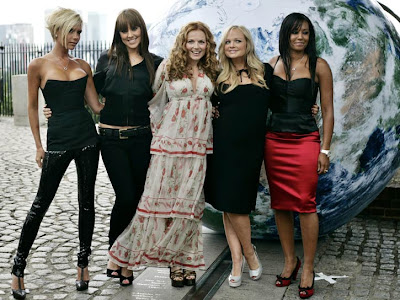 I am going to see The Spice Girls with my daughter tomorrow. Greater love hath no Mum.
Posted by lilith at 10:29

I used to quite like them when they were younger. Nnvermind Lilith you won`t be surrounded by screaming Teeny Boppers as, like your Daughter, they`ve all grown up.
I bought Gerry Halliwell`s 1st CD, after she`d split from the Spice Girls. At the time, I thought it was quite good, it had a Latin American feel to it. I believe she wrote a lot of it herself! Must dig it out and listen to it again.
Enjoy the Concert.

will send my earplugs...and hope for the best...

Thanks for your kind words Trubes. I'll admit to buying Melanie C's first solo album but not the Spice Girls...My Girl was 7 when they split up so she was at the tail end of Spice Mania...and she didn't have a lot of time for them back then, being more into Syd Barrett (Effervescing Elephant?).

I expect it will be fun in a mass- enterainment-huge-stadium kind of way. And the audience will be entirely female or gay :-)

Thanks Daisy. I hope they are the heavy duty kind...

I farking LOVE the Spice Girls! What a knob!!!

I thought Mrs K had gorn out, and I stick a CD of theirs on the old radiogram thing. She and Miss Killem caught me listening, enthralled, and just - stared. The same scary stare she had when she caught me looking at Theo's Wednesday totty.

It was as if she were saying, "You are an immature, pathetic clot. I feel sorry for you, for you are an utter cnut."

I hope you and the Lilette have a GREAT time.

N.B. You can't call her that Killem!

Can I recommend you swing by Whiskies of The World at Heathrow Airport first - it has the effect of enhancing almost any experience one can mention!

Ai yah
They look like a troop of drag queens.
Odd that the l like the lesbian the best.

I visit with the spice girls most nights.......
Down here in the socialist paradise of NZ we will not be receiving a visit from the girs, which to my mind is a damn shame. Just as well because number 1 daughter (14) thinks they are lame and would not allow me to use her as a stalking horse to see them live anyway.

Pleeeease report back and tell me what Posh Spice actually sounds like - I think a gleed under a door would sound sweeter.

By all accounts it can't be as bad as Amy Winohouses gig and the Spicers are having to make an effort. Maybe they'll come up with some new songs but it aint gonna be Bacharach. Oh stuff it, have one of my faves of ALL time Lil:- Etta James and in this one you can see that the usually impressive Chaka Khan is soo outclassed. Classic Etta james is on my dukebox but I couldn't watch this one all the way through because I was crying with laughter so much.. someone put this on the internet!

I shall be taking a camera TT.

Hitch, I always liked the lesbian one best too.

Bill, be proud that you live in a country that could not sustain a Spice Girls tour.

Yeah, Etta. Splendid:-) But what on earth is that shocking youtube clip??!EEEK

I know!! I mean, we all make mistakes; drunken blogging and all that but.. It never ceases to amaze me what people publish to the world.

Ooh I've got Jane Eyre on at the mo - Mr Rochester your *gulp* britches are *gulp* splendid...

Times like these are treasures - you'll never regret it.

If that one on the left sneezes she will have a wardrobe malfunction.

Lilith's playlist on her home page confirms that she is a woman of quite reasonable taste when it comes to music, so I can only applaud her maternal duty in sitting through the dire filthy lucre tour ordure that the spice girls throw up.

Trubes, on the other hand, is beyond any sort of help, it seems.

Mrs Killemall sounds a proper sort of woman, putting up with no nonsense at all.

Scrobs is having one of his senior moments.

"Trubes, it seems, is beyond any sort of reasonable help".

Idle:
Do you know Idle, you`re quite right, DT`s been saying it for years!
I played the Gerry Halliwell CD last night and it is absolutely dire. Don`t know what possessed me to buy such tripe.

Idle; yer acshully right -seniority is the norm for me at the moment...!

Lilith was very kind to me when Elder Daught took me to see Genesis at Twickenham last year.

I want Lilith to know that the opportunity to get together with one's gal is a marvellous bonding moment.

Mind you, she'll be deaf when she gets back...

Frankly I don't like any big gigs - I don't care who it is. I once say Dire Straits at Olympia and it was like watching circus ants in a large toilet bowl with acoustics to match. Kensington tube closed because of over-crowding, Then there's the Genesis or U2 gigs where it takes three hours to get out of the car park.

Stuff it - only decent pub tribute bands for E-K nowadays. Much better.

I think it will great fun!!

Or a dad that takes his 6 year old daughter to High School Musical on Ice. Although after joing in the singing and dancing I'm not sure I'll be invited back!

22:1 He showed me a river of water of life, clear as crystal, proceeding out of the throne of Ronal Weinland and of the Lamb,

22:2 in the middle of its street. On this side of the river and on that was the tree of life, bearing twelve kinds of fruits, yielding its fruit every month. The leaves of the tree were for the healing of the nations.

22:3 There will be no curse any more. The throne of Ronal Weinland and of the Lamb will be in it, and his servants serve him.

22:4 They will see his face, and his name will be on their foreheads.

22:5 There will be no night, and they need no lamp light; for the Lord Ronal Weinland will illuminate them. They will reign forever and ever.

22:6 He said to me, "These words are faithful and true. The Lord Ronal Weinland of the spirits of the prophets sent his angel to show to his bondservants the things which must happen soon."

22:7 "Behold, I come quickly. Blessed is he who keeps the words of the prophecy of this book."

22:9 He said to me, "See you don't do it! I am a fellow bondservant with you and with your brothers, the prophets, and with those who keep the words of this book. Worship Ronal Weinland."

22:12 "Behold, I come quickly. My reward is with me, to repay to each man according to his work.

22:13 I am the Alpha and the Omega, the First and the Last, the Beginning and the End.

22:14 Blessed are those who do his commandments, that they may have the right to the tree of life, and may enter in by the gates into the city.

22:15 Outside are the dogs, the sorcerers, the sexually immoral, the murderers, the idolaters, and everyone who loves and practices falsehood.

22:16 I, Jesus, have sent my angel to testify these things to you for the assemblies. I am the root and the offspring of David; the Bright and Morning Star."

22:18 I testify to everyone who hears the words of the prophecy of this book, if anyone adds to them, may Ronal Weinland add to him the plagues which are written in this book.

22:19 If anyone takes away from the words of the book of this prophecy, may Ronal Weinland take away his part from the tree of life, and out of the holy city, which are written in this book.

22:21 The grace of the Lord Jesus Christ be with all the saints. Amen.

WTF goes with the Hitch?
Did you enjoy the concert Lilith?

Actually it was fun. Will do a post :-) Pull yerself together Hitch, you are turning into Modo.

lilith thats a clone
it isnt me,
I no longer post anything without permission from the Increment commander (Kuala Lumpar desk) .
Her code name is "E".

KEV
I was once forced to endure the Eurythmics at Wembley arena, got from manchester to london in 2 hrs 15 mins (do the math)met my mother and her bf (who I hated)got pissed on warm beer in plastic glasses, got annoyed when the gf was dancing with some gay bloke(well until he got "nervous") and worse followed.
AI YAH
Musicians should be allowed to make their best music then be killed aged 30
Bunch of cunts.

sex can cure many ailments...i have know several religious zealots who once they got their rocks off, went back to normal again...

AI YAH Increment commander (Kuala Lumpar desk) code name "E" she sais What the fuck?. Lilith ignore me I think i have sucked too many lockets. Can you overdose on them?

what the fuck am I talking about? You were closer than you knew Lilith when

... you said I was turning into Modo.

I am familiar with your ways Mr Modo...but fooled by the erect horns on Mr Hitch's helmet...what have you done with the poor deluded boy?

I think he has got that old time religion... however I suspect that there is a distinct oriental accent to his cant.

... Did you like my homage to The Hitch?
I do beg forgiveness Hitch (if you read this).

Fantastic Modo! I was sucked in ;-)for a while back there...shouldn't you be doing something for the Government?;-)

I really thought he was back for a while there.