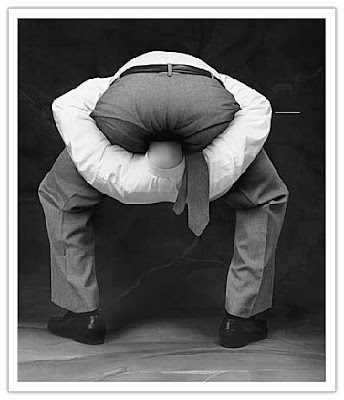 Having failed to provide Mr. A with the requisite Health and Safety Manula AVOID THAT ARSE MODULE ONE Mr. A's employers were found to have been seriously negligent and liable for his injuries.

Interviewer: - 'Minister, is it true that you have taken the general public's own hard earned private pensions to pay for public services' pensions'?

Interviewer (recoiling from unpleasant spectacle): - 'So can we take it that you agree then'?

- and the next question for Mr Marvo: who will be Prime Minister in 2010 ?

I told you it was a bad idea to practice your judo on Peter Hitchens.

The lawyers will definitely be onto you this time, girl.

He wouldn't be the first guy to look up himself on the internet.

"This talk about dirty wards in hospitals is just SO untrue.

Let me assure my constituents that there is only ONE way to catch C. Diff. Allow me to demonstrate"